What is LayerZero? – Metis Launch Article. 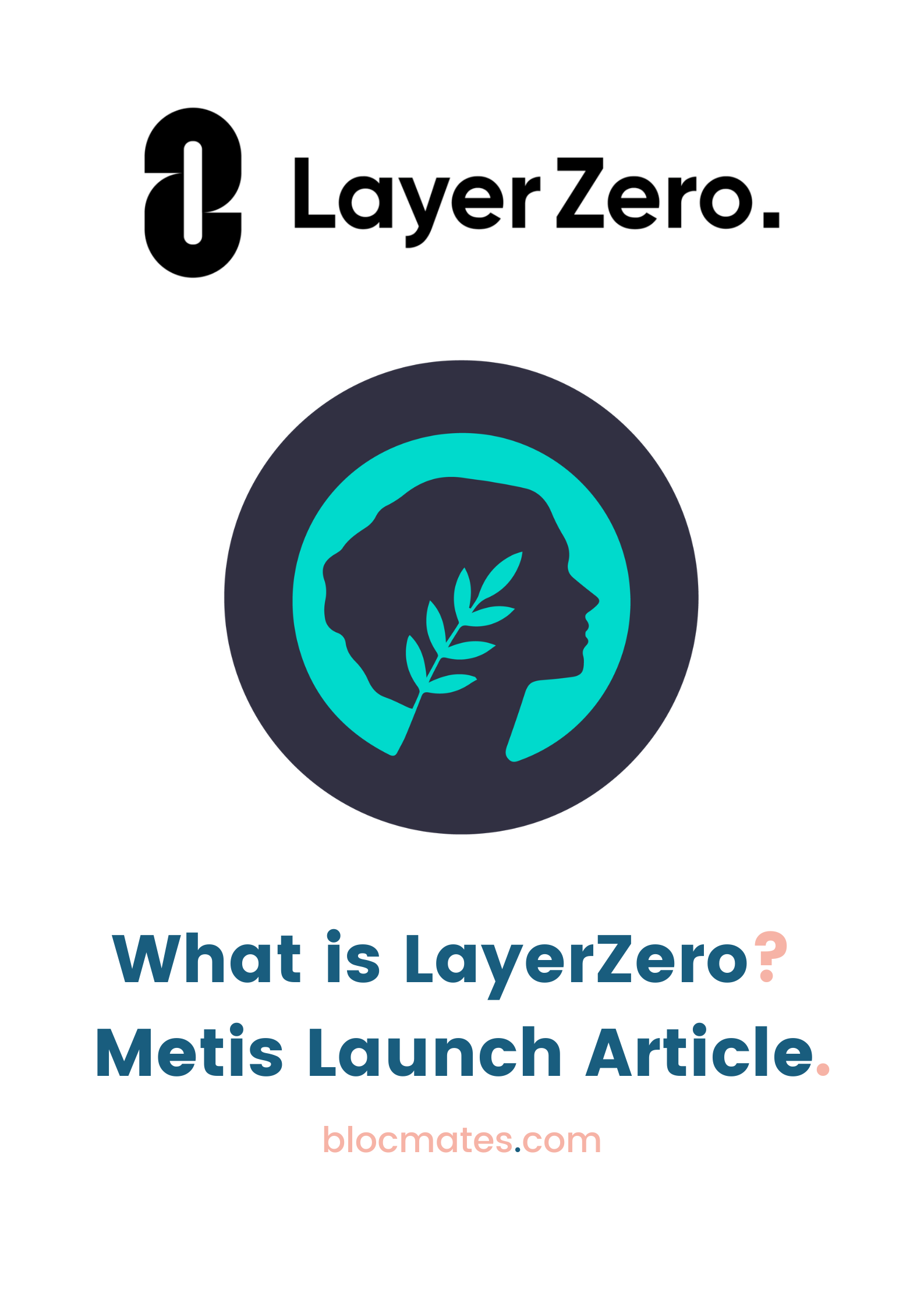 One of the major challenges that the web3 and crypto industry will and continues to face is the lack of seamless interoperability between the various blockchains.

Through the advent of perhaps Bitcoin maximalism, die-hard communities have formed on Reddit, crypto Twitter and elsewhere. Siloed echo chambers are established to propagate certain ideologies and beliefs. Now, this isn’t data-backed, but my guess is that such behaviour has had at least some effect on the development side as well. Perhaps, certain devs have fallen prey to this illusion – of a superior product that they’ve built and that the idea of interoperability is likely foreign to them. Blame the maxis haha. They’re more concerned about their bags I tell ya. However, only a minor subset of people would agree with the idea of building in isolation. Our industry relies on partnerships and collaborations to progress further and grow. It is in the best interest and a net benefit for all parties involved.

Core believers and contributors in the space see crypto as analogous to a public good of sorts, and if this is the case, tooling and infrastructure need to be built in order to support frictionless omnichain interoperability between blockchains that is secure.

The bigger problem has been that a bunch of smart people have built these massive ecosystems and public networks, but these do not communicate well with each other. The intent wasn’t doubtful (for the most part), but the foresight was perhaps missing. Regardless, the problem has been well documented in the last few years, and solutions are appearing. LayerZero is one such solution.

In this article, I intend to explain what LayerZero is, why it is needed, explore the ecosystem, the deployment on Metis, and much more.

I believe it is easier for me to explain what LayerZero isn’t, and then based on that, we’ll understand what it actually is.

LayerZero is an omnichain interoperability protocol that connects blockchains. The protocol allows various applications to leverage its tech to build and deploy truly interoperable decentralised applications.

As per the docs, “LayerZero is an omnichain interoperability protocol designed for lightweight message passing across chains.”

A more technical explanation would be that LayerZero is a configurable on-chain endpoint for User Applications (UAs) that runs a ULN (Ultra Light Node) – more on this later. It relies on the cooperation of two parties, the Oracle and the Relayer, to transfer messages between on-chain endpoints. When a UA sends a message from one blockchain (chain A) to another (chain B), the message is routed through the endpoint on chain A. The endpoint then alerts the designated Oracle and Relayer about the message and its intended destination on chain B. The Oracle sends the block header to the endpoint on chain B, and the Relayer submits a transaction proof. This proof is checked on the destination chain, and the message is delivered to the intended address.

Without getting too technical, the aim of LayerZero is to provide seamless interconnectivity between different blockchain networks, allowing users to execute transactions without even realising it. It enables decentralised applications (DApps) to operate across different blockchain platforms, including EVM and non-EVM systems, creating the first omnichain applications in the world.

Let me briefly touch on the current landscape of cross-chain bridging and transmission of messages and how LayerZero is disrupting the space. Broadly speaking, there are two approaches:

Thus, we need to find a sweet spot in the middle. The safety and security of an on-chain light node and the requirement for economical ways of functioning like running a middle chain.

An Ultra Light Node (ULN) aims to solve this problem. As you’ll recall, LayerZero runs on a ULN. The Ultra Light Node (ULN) offers the security of a light node at a more cost-effective price point, similar to middle chains. This is achieved by performing the same validation processes as an on-chain light node, but instead of storing all block headers in sequence, block headers are streamed on demand by decentralised oracles. This allows the ULN to maintain the same level of security while reducing storage and computational requirements.

I know I threw some technical jargon your way, and trust me, even I had a hard time wrapping my head around it all. I come from a non-tech background myself. However, I hope the gist of it is clear.

If you want to dive deep into the tech and the implementations, you can read the whitepaper here. From a normie’s perspective, like myself, the above explanation should suffice.

Jedi blocmates wrote a thread on this topic that explains this even further.

I am sure you are wondering just about now what are some of the use cases of this tech.

The obvious answer is that you can do simple cross-chain “bridging” of crypto assets. While that is a major use case, there is a lot more than meets the eye here. LayerZero enables cross-chain state sharing, bridging, lending and borrowing, swaps, governance, etc.

I hope these use cases explain the utility and importance of LayerZero – an omnichain interoperability protocol.

As of writing, LayerZero supports the following blockchains:

Again, by supporting these blockchains, it means that builders can leverage LayerZero to deploy dapps across these networks that can seamlessly communicate in a frictionless manner amongst the networks.

It would be beneficial to get an overview of the ecosystem of dapps that are leveraging LayerZero. Some of the major ones are:

These applications are building for an omnichain, interoperable and decentralised future, with LayerZero as the infrastructure layer or the tooling essential to ensure this future.

On 9th December 2022, LayerZero went live on the Metis Andromeda Mainnet. For those unaware, Metis is an EVM-compatible Layer 2 scaling solution built on top of Ethereum that allows for cheaper (cheapest relative to other L2s at 0.02 cents per tx) and faster transactions. If you want to learn more about Metis, you can read our guide here.

Regardless, this partnership will massively help the multi-chain protocols that are deployed on Metis Andromeda and will further the interoperability development on Metis. The following projects will benefit

As you can imagine, these are muti-chain protocols that are also deployed on Metis along with other networks. Now with the partnership with Layer Zero, these protocols can communicate seamlessly with the other chains they’re deployed on.

In essence, this partnership is intended to help various apps deployed on Metis to utilise LayerZero for omnichain communication to and from Metis. Therefore, one can see Metis at the protocol layer, the underlying tech that allows the deployment of various decentralised applications. SushiSwap, for instance, at the application layer, which is one DApp deployed on Metis and on other chains – as we head towards a multi-chain future. Finally, LayerZero is at the communication layer, which helps, in this case, SushiSwap to seamlessly interact and communicate to and from Metis to other networks it is deployed on. This is a layman’s explanation, I’m sure there are nuances to this simplified explanation.

I ultimately we are headed towards a multi-chain future. At blocmates we have been strong advocates of the fact that there won’t be a winner takes all kind of thing, but instead, a host of blockchains and networks will coexist. Purpose-driven blockchain may become a thing, we can never tell the future. Nonetheless, as applications are deployed on multiple blockchains, it becomes paramount that omnichain communication and bridging is secure. LayerZero is building towards it.

The Metis and LayerZero partnership was a no-brainer for both parties. Given that most applications deployed on Metis are multi-chain, this partnership will aid them with their future development. As for LayerZero, it gives them another ecosystem and continues on their journey towards a true omnichain interoperable world.

My novice brain tells me that the adoption of this tech could challenge the world of wrapped assets and cross-chain bridging. That remains to be seen, and this isn’t a binary thing.

That’s it for today folks, I hope you found this article useful and informative.

This article was written by Shaurya – Shaurya is working full-time in crypto and has been involved in the space for over 2 years now. He’s passionate most about DeFi in the web3 industry. In his writing, he is a master at breaking down complex topics in an easy-to-understand language. Go give this legend a follow on Twitter.

This site uses Akismet to reduce spam. Learn how your comment data is processed.