What Is Sturdy Finance? – A Complete Guide. 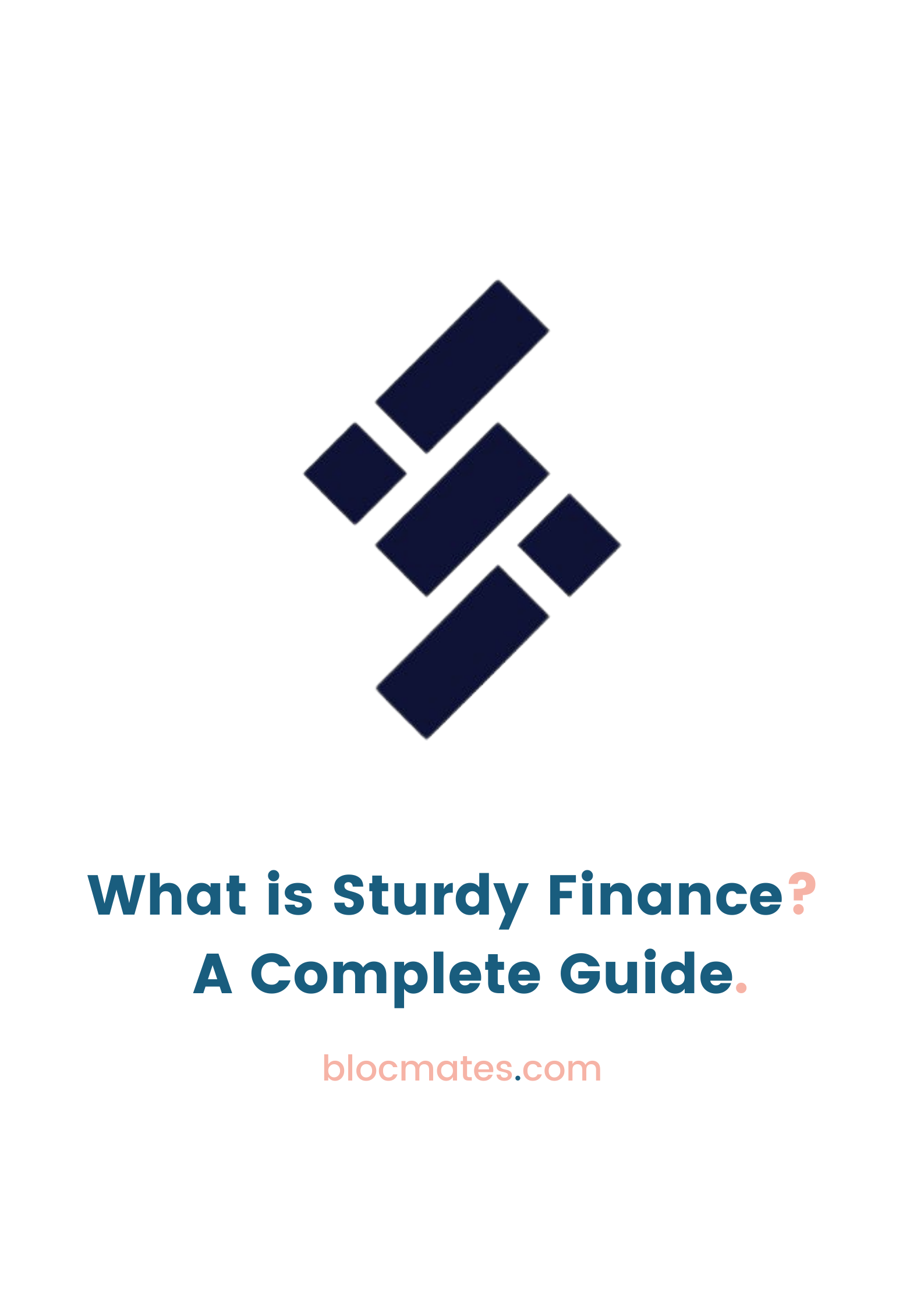 There is no denying the fact that borrowing and lending protocols have played and will continue to play a pivotal role in the widespread adoption of DeFi across the world. I mean, who doesn’t understand the appeal of decentralised, permissionless, transparent, and pseudonymous banking? Sure, banks offer a suite of various services, however, at the core of it is lending and borrowing. On-chain DeFi lending and borrowing protocols have unlocked a new world of possibilities and opportunities.

Certain critics point out that undercollateralized and unsecured credit isn’t readily available in DeFi, therefore, from a capital efficiency point of view, it is a failure. Even though there are various protocols working in this direction. Moreover, in the TradFi world, governments have the tools to bail out underwater institutions indefinitely. Thus, unsecured credit can work well in such a setup. I’m sure the gigabrains will figure it out in DeFi too – at scale. Let’s not get there now.

Aave and Compound led the charge bringing decentralised lending and borrowing protocols to the forefront of DeFi. The open-source nature of our industry then allows builders to use existing ideas and then execute on top of those as the base layer.

Sturdy can be thought of as one such innovative DeFi lending protocol on Ethereum and Fantom.

Don’t commit the mistake of thinking of Sturdy as another Aave or Compound fork. Trust me, there’s a lot more to it – as you will discover too.

In this article, I intend to explain what Sturdy is, what makes the protocol different, how it all works, and what the team has been up to.

For starters, Sturdy isn’t your conventional DeFi lending protocol. Sure, lenders and borrowers are involved, however, the dynamics of the protocol are entirely different from, say, Aave.

As per their whitepaper, DeFi’s best yield farmers use Sturdy to access up to 10x leverage to farm with.

Sturdy allows users to take on the role of either a lender or a borrower. Lenders supply liquidity by depositing stablecoins, and borrowers borrow these funds to invest in whitelisted protocols such as Convex and Balancer.

The farming rewards from these investments are split between the lenders and borrowers. For example, a borrower could deposit Convex FRAXBP as collateral, borrow USDC, and invest that USDC in the FRAXBP pool on Convex. They would earn a share of the CRV rewards, with the rest going to the lenders.

Here’s what happens under the hood when Bob levers up using Sturdy’s one-click leverage feature:

Above is a list of assets that can currently be collateralised on Sturdy. Stablecoins like DAI, USDC and USDT cannot be used as collateral for a loan but can only be deposited – which are then lent to other users who want to borrow against their collateralised deposits.

This mechanism is vastly different from Aave and Compound. On those protocols, free markets decide the lending and borrowing rate.

The primary difference here is that both lenders and borrowers share the yield that is generated via Sturdy.

In summary, Sturdy can be thought of as a decentralised yield farming fund. Borrowers can leverage collateral assets like Convex LP tokens and receive up to 10x leverage in exchange for giving up some of their yields. Lenders provide liquidity and, in return, receive a share of the yield earned by borrowers. This system allows lenders to enjoy the benefits of yield farming without incurring gas costs, committing a lot of time, or taking on increased risk. At the same time, it enables borrowers to take on larger positions for farming.

Let us look at it from both the lender’s and borrower’s sides – as they are the key stakeholders.

Sturdy is a platform that allows lenders to earn high, stable yields without having to search for opportunities and take on excessive risk constantly. It is a good option for people who are new to the world of decentralised finance (DeFi). By providing liquidity on the platform, users can earn returns from borrowers’ activities without spending as much time and effort and without exposing themselves to too much risk.

Interestingly, I hope you can gauge that lenders do not rely on borrowers paying insane interest rates to earn yield but instead earn a portion of returns generated from DeFi activities that the borrowers engage in (whitelisted by the protocol) by borrowing lenders’ capital.

So while in a traditional lending and borrowing market, a relatively high utilisation ratio will dictate a high APR that lenders earn, as per the yield curve. For Sturdy, the yield depends on the DeFi opportunities that are being leveraged to earn that yield and occasionally depends on the utilisation for an asset – precisely when it is over 80%. Borrowers pay an interest rate when such is the case. I will explain it in detail later.

Finally, the major benefit from a lender’s pov is that they can be exposed to high yields that are typically reserved for volatile assets whilst holding stablecoins and earning that yield in stablecoins. Ain’t that cool?

Sturdy allows borrowers to increase their yields with high leverage, up to 10x, while minimising liquidation risk. This is a no-brainer for yield farmers who want to amplify their profits in a sustainable way.

Apart from that, because Sturdy isn’t following the traditional Aave model in that it doesn’t rely on interest payments from the borrowers to pay off the lenders, the protocol is able to offer zero-interest loans when utilisation is < 80%.

Therefore, if I had to sum up why lenders and borrowers use Sturdy, it is primarily due to two reasons:

Whilst I hope I was able to explain the protocol dynamics, I reckon it’d be helpful to outline certain use cases that the protocol supports.

In certain cases, only the lender is paid. For instance, when depositing WFTM as a collateral asset, the user/borrower will not earn any yield on that deposit. All the yield will be redirected to the lender. In this case, the borrower deposits their asset to avail of an interest-free loan.

I hope that provides more insight into a couple of different use cases of Sturdy.

All collateral assets are staked via Yearn Finance.

frax3crv, ib3crv, susd3crv, and tusdfraxbp are staked via Convex. Borrowers earn the Base Curve APR and a portion of the CRV vAPR from Convex staking.

Sturdy differs from other lending protocols, however, in certain instances, borrowers have to pay interest on borrowing.

Loans on Sturdy are interest-free, except for the atypical case where a reserve has utilisation higher than 80%.

Interest rates increase by 3% for every per cent that utilisation goes above 80%, meaning at 100% utilisation, borrowers pay 60% APR.

These parameters are subject to change based on liquidity and market conditions.

These conditions are essential to ensure that utilisation is kept in check and that the protocol never faces a liquidity crunch. A high borrow APR will incentivise quick repayment of the loan. It will also incentivise more lenders/depositors to earn high lending APR.

As for the lender’s yield, the yields are paid out every 24 hours. Yields from collateral staking are not paid out consistently on a daily basis. The APY displayed may be different from the APY the user receives after 24 hours, but it has generally been accurate over longer periods of time (1-2 weeks).

If Bob’s Health Factor drops below 1, his loan will be eligible for liquidation.

A liquidator can repay up to 50% of a single borrowed amount = 2.5 ETH worth of DAI.

In return, the liquidator can claim collateral which is stETH (5% bonus).

This is similar to the Aave and Compound model. A user can maintain a required health factor by either supplying more collateral or repaying their debt.

In early October, the Sturdy team announced Sturdy 1.0, which is a funny name – given the protocol has been live on the mainnet for some time. However, the name signifies how early the team thinks they’re in development and what’s to come in the future as far as DeFi lending and borrowing goes.

These are the core focus areas with Sturdy 1.0:

The team continues to work hard on shipping the promised deliverables. The public release of Sturdy 1.0 is scheduled on December 20, which will mark the end of the Brickmas event (more on it below).

In the end, I like a lot of things about Sturdy. They took a successful model from Aave and developed a truly unique decentralised lending protocol.

What’s more, is that they do not have a token to incentivise TVL and artificially inflate user activity. I’m not saying that token incentives as a way of bootstrapping liquidity is evil, but if a protocol is able to maintain ~ $25 million in TVL without any token incentives – it is a massive achievement. In fact, Sturdy is the largest lending protocol on Ethereum without a token. If that isn’t PMF, I don’t know what is.

Moreover, Sturdy isn’t a cheap fork either. Some serious development effort has gone into building the protocol. It doesn’t take a tech whizz to identify that.

Well, that will do it for today folks. I hope the content was useful and informative. Finally, I don’t want to give anyone false hopes, but there may be an airdrop sometime in the future, eh? Who knows! But people don’t go in Discord and spam, “wen airdrop”, that won’t be appreciated haha.

This article was written by Shaurya – Shaurya is working full-time in crypto and has been involved in the space for over 2 years now. He’s passionate most about DeFi in the web3 industry. In his writing, he is a master at breaking down complex topics in an easy-to-understand language. Go give this legend a follow on Twitter.