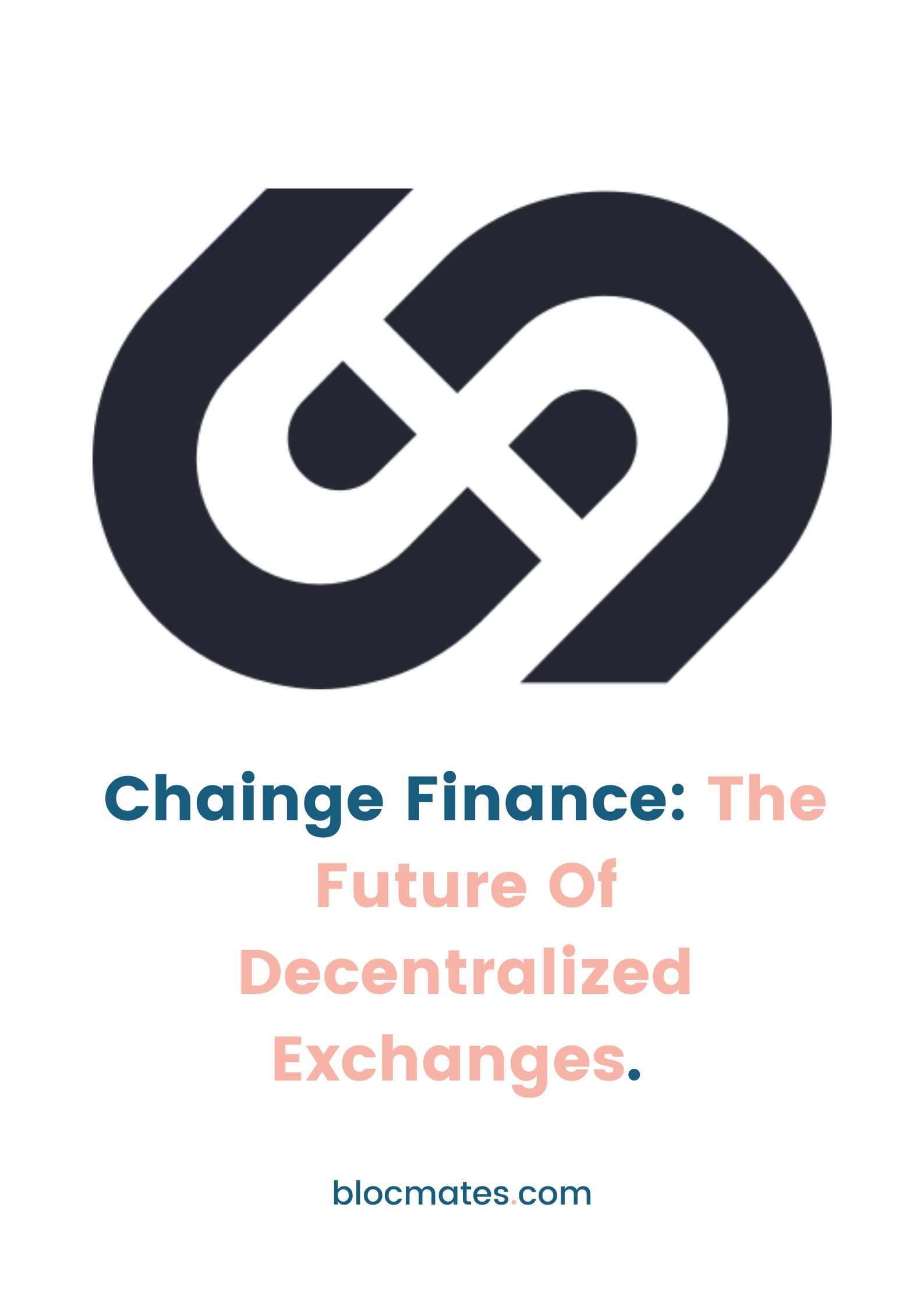 To bridge or not to bridge that is the question. To be the rotatooor. As we navigate the tedious blockchain world, we often find ourselves searching for the best places to conduct our swaps. A.K.A, what chain/DEX has the most liquidity for our swap.

We must traverse different bridges, chains, dexes, and liquidity aggregators to find the best deal. Well, what if I told you, there was one DEX that could give you the best deal on any chain and on any token all without needing to bridge?

Let me introduce you to Chainge Finance, the first and only true cross-chain liquidity aggregating DEX. The days of the rotatooor are officially over. Forget bridging. Forget slippage. Trade on Chainge. The DEX for all your Defi needs.

Say goodbye to the rotatooor and say hello to Chainge…

Before going into the ins and outs of Chainge Finance, an important distinction between multichain and cross-chain liquidity aggregating should be clarified. The Chainge team made a great thread about it here: Chainge Finance Thread.

However, cross-chain aggregation works by seamlessly connecting chains in a way where; the need for bridges and the need to change networks is eliminated.

Therefore, you’re not utilizing cross-chain liquidity you’re utilizing whatever liquidity the bridge has. In addition, it means that these aggregators can only access liquidity one chain at a time because assets must be bridged over to conduct the swap. However, Chainge is a true cross-chain aggregator leveraging the DCRM technology of the Fusion blockchain, it can seamlessly pull liquidity from every chain simultaneously. Here’s a graphic for visual learners: 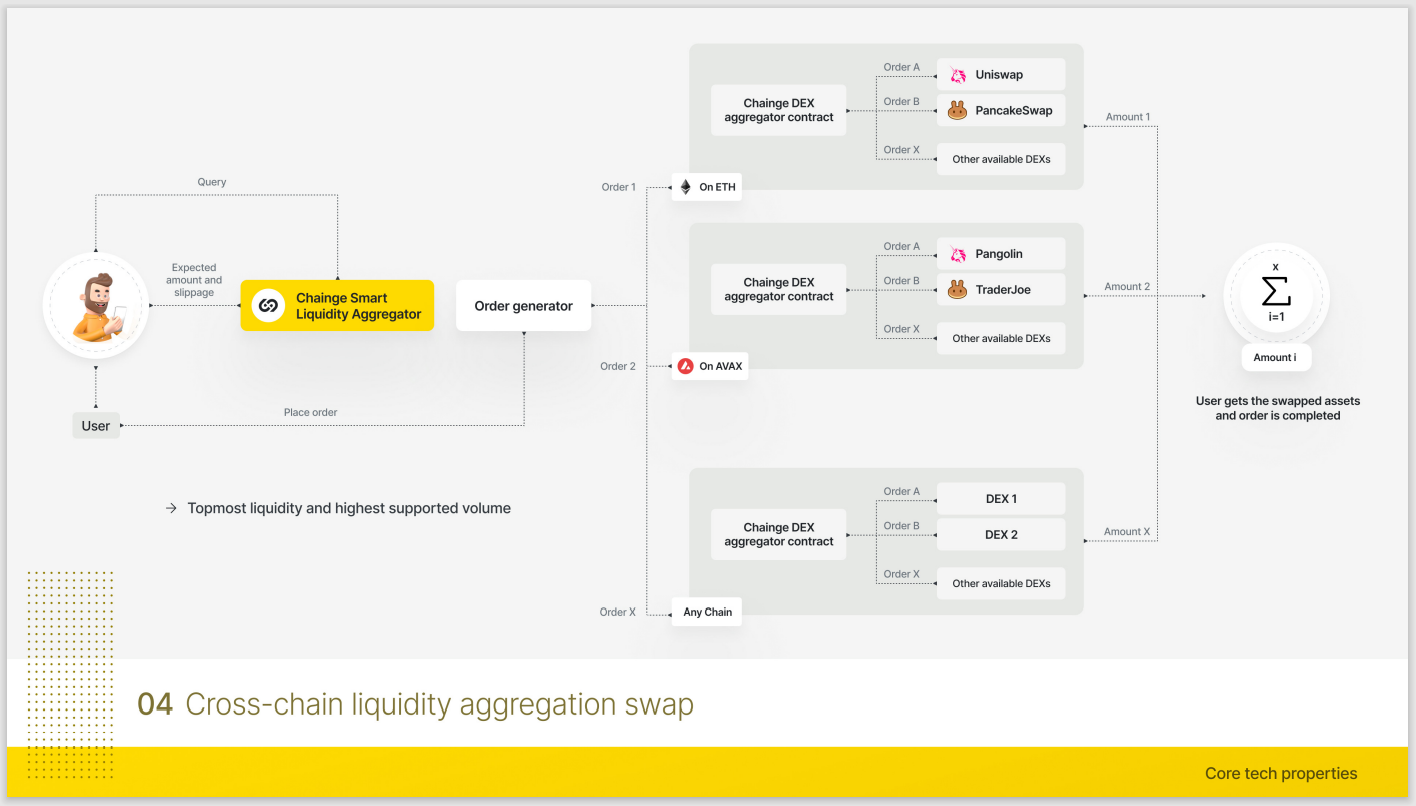 Taking gas into consideration, the Chainge DEX smart router splits your swap into multiple transactions between multiple chains to give you the best price for your swap. All of this happens in one transaction without the need to bridge assets or change networks. Will go into more detail about how this is possible in the next section.

In conclusion, Chainge Finance is the ONLY cross-chain liquidity aggregator on the market because it’s the only one that can pull liquidity from multiple chains simultaneously for any given swap.

How Does Chainge Work?

These four came together to validate, certify and help enhance the DCRM architecture, which was built specifically for token portability and token exchange across all networks. The way it works is similar to how centralized exchanges work: they have custody wallets on the blockchain and then transfer them to you. Essentially, the protocol has custody of different assets (BTC, ETH, AVAX, etc…) on an external blockchain. When people want to move their assets, the Fusion chain will use these external wallets to distribute the funds to the user.

Fusion is the only blockchain capable of seamlessly connecting with every chain in existence and therefore the only chain which can have a DEX that can pull liquidity from any chain. Again for a more in-depth look please refer to either: A Complete Guide To Chainge Finance or Fusion Blockchain Docs

Now that we know that Chainge leverages Fusion’s DCRM technology. How exactly does it use it?

Chainge uses the DCRM cross-chain technology and a cross-chain swap pathfinder algorithm to facilitate traders’ cross-chain swap orders. In English, Chainges’ pathfinder algorithm (smart router) scrapes through all active DEXs to find the best transaction rate for the user’s target pair swap & then automatically helps split the orders between 20 DEXs across 10 chains (with more to be added).  The Fusion blockchain conducts the swap on behalf of the user and then transfers the assets to the user instantaneously.

The aforementioned smart router works with the Fusion blockchain to create a powerful duo allowing access to liquidity anywhere. Here’s a more practical example. Let’s say we wanted to swap USDC for ETH. What would happen on the backend?

If you’re still having trouble understanding refer back to the last few graphics as they might give you a clearer picture. Nonetheless, if there is liquidity the Chainge liquidity aggregator will find it. 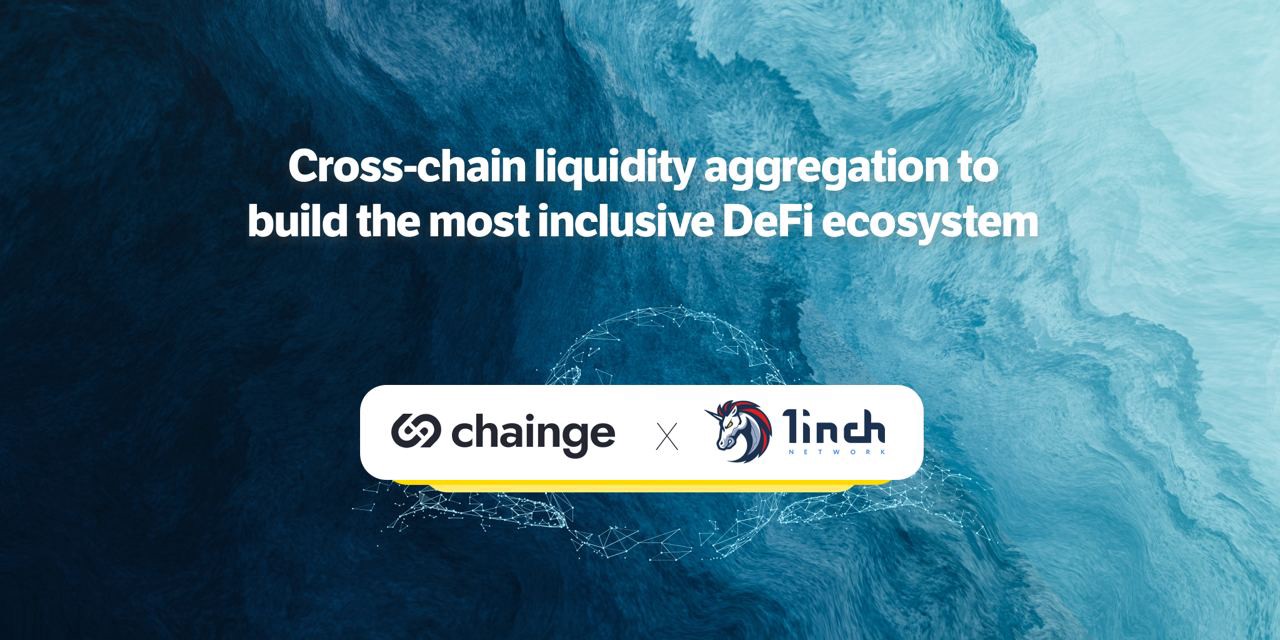 Recently, Chainge recently partnered with 1inch to integrate liquidity aggregation. This integration gives Chainge users access to all networks that 1inch aggregates from.

This includes all of the following: Ethereum, BNB Chain, Polygon, Arbitrum, Optimism, Gnosis Chain, Avalanche, and Fantom. In addition, it implies an additional listing of 160 tokens for Chainge users to swap.

This partnership helps both parties given that Chainge can now access deeper liquidity and doesn’t need to individually add dexes. In return, Chainge funnels liquidity through 1inch.

Currently, the Chainge DEX aggregates liquidity across 10 chains from 20 DEXs & 1 aggregator as follows:

Now to the good stuff. Talk is cheap, how do Chainge and cross-chain liquidity compare against the competition.

Quick preface: This is not in any way a comprehensive comparison but I think the sample size is big enough to demonstrate the power of cross-chain liquidity.

However, I did do a more comprehensive comparison on my own which is not included here for the sake of article length. These comparisons along with the limitations and exceptions will be discussed a bit later. In terms of the comparison perimeters, I started by comparing ETH/USDC liquidity simply because this is quite a common swap and very liquid.

I used 20 million for all the swaps because larger swaps give a better look at the vast advantages of cross-chain liquidity. In addition, I compared less liquid tokens to further demonstrate this discrepancy. That said, I’ll let the exchange rates do the talking now and let you make up your mind. 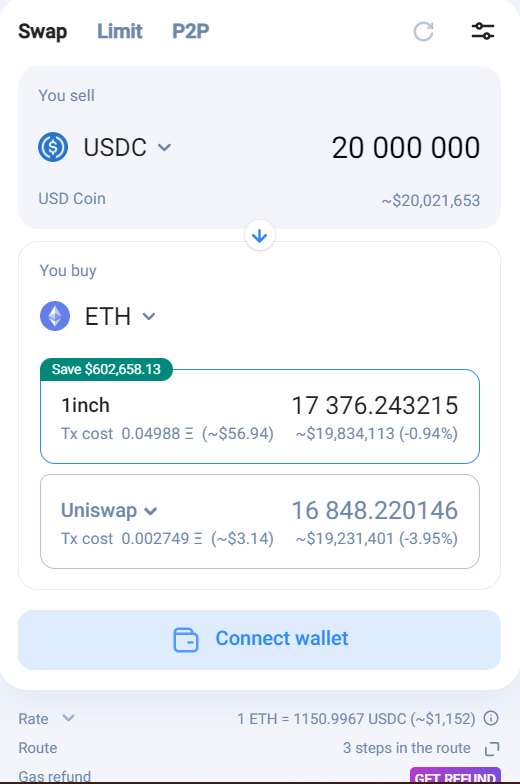 Sticking points and how Chainge will overcome:

When I was doing my comparisons between Chainge and all these aggregators, I found that Chainge had a slightly worse rate than incumbent blockchain aggregators. Chainge’s smart router does its job as intended the only issue is that it’s limited to the dexes that are integrated with it. Incumbent aggregators are integrated with all possible dexes inside their chain which gives them more access to liquidity than Chainge.

What that means, is that in places where Chainge is connected to few dexes and 1inch cant help as much. Here is an example of what I mean. 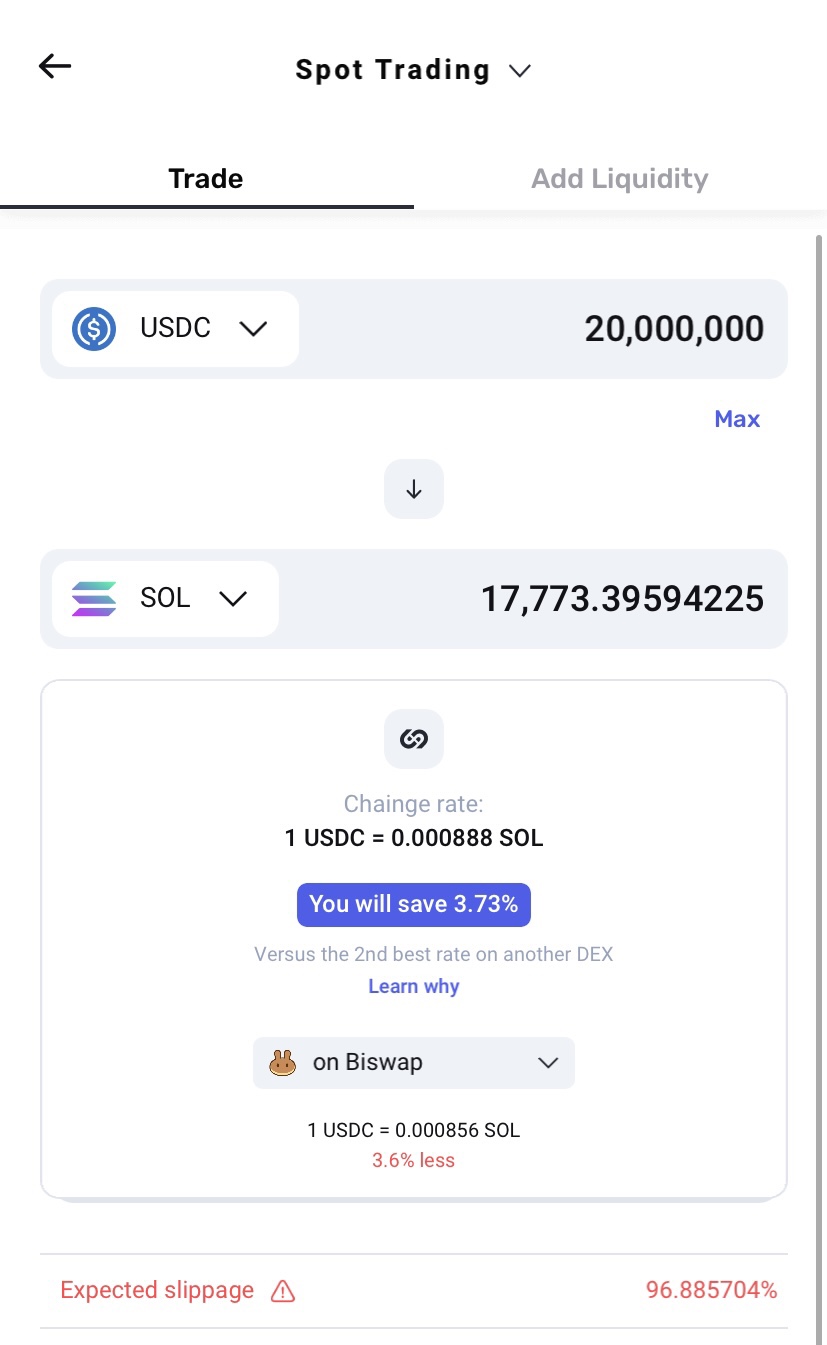 So you see Chainge is bottlenecked because it can only route SOL through Pancakeswap and Biswap. It isn’t currently accessing all the liquidity it could on Solana. This is much the same narrative with most tokens with which Chainge is not fully integrated. Here is a more subtle example. Chainge loses to Paraswap because it isn’t aggregated to every DEX possible on FTM where most liquidity is found. 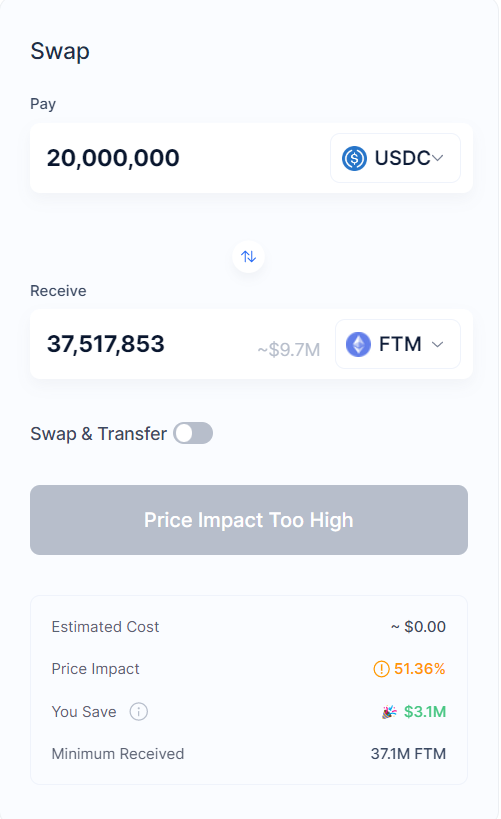 Here we can see all the DEX’S from which Paraswap gets liquidity. While Chainge only pulls from SpookySwap and SpiritSwap, for now. 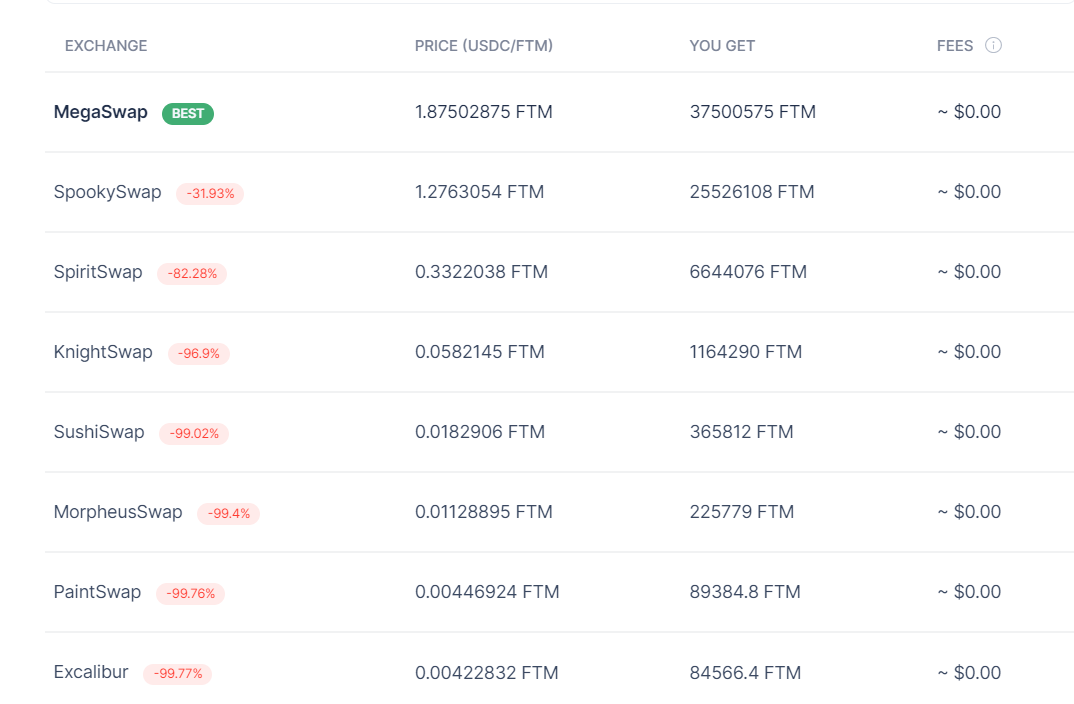 Something which they are already doing, 1inch being an example of that. My only real criticism of the Chainge DEX; however, is their lack of a desktop version. Currently, you can only use the Chainge DEX with the phone app.

Albeit, they have said they will be making a desktop version soon so I will be looking forward to this.

Overall, though Chainge’s user experience is very smooth and relative to other aggregators the process is far more user-friendly.

For example, on Chainge when I want to swap something I just select the swap I want to do and… that is about it. Not to mention a seamless sign-up process and a much more web2-like process flow, which is a good thing.

Whereas on these other aggregators I have to continuously change the network to fit the specific place I want to swap. In addition, there are so many variations of the same token (ETH BEP-20, ETH ERC-20, ETH Osmosis) that pop up which can be confusing for some people. Chainge is just USDC to ETH and done, users don’t need to concern themselves with the underlying token standard.

TLDR; In places where liquidity is mainly found on just one chain the incumbent aggregators are better integrated. While in the near term this means Chainge won’t give you the best deal everywhere. I’m not concerned because all Chainge has to do is integrate more dexes or more aggregators to its exchange, which it is currently doing on a weekly basis.

As the DeFi landscape changes and new emerging chains become more and more active, it would make sense for Chainge to bide their time and really follow the liquidity. For example, a lot of talk is happening around the Cosmos ecosystem of late and the very nature of that the IBC would benefit greatly from a real cross-chain aggregator like Chainge. This could be an interesting development, in my opinion.

Cosmos being an interconnected web of blockchains that all have fragmented liquidity could really be an interesting place for Chainge to implement their user-friendly and mobile-first aggregator.

Change is really aiming for the next 100m DeFi users which, naturally, makes sense to be on mobile. There is a reason Solana and now Polygon are set to battle it out to acquire the ever-increasing mobile-user market in DeFi.

Lastly, the best part of Chainge is that I don’t need to use any bridges or change networks ever again. All of my assets are in one place and can be freely traded no matter where they are. Given this convenience, I’d still use Chainge for most of my trades unless I was moving big size on specific closed-off tokens like SOL where Chainge isn’t well-integrated yet. But, naturally, the average user isn’t trading $20m on mobile, for now…  if anyone wants to give me $20m then my DMs are open 🙂