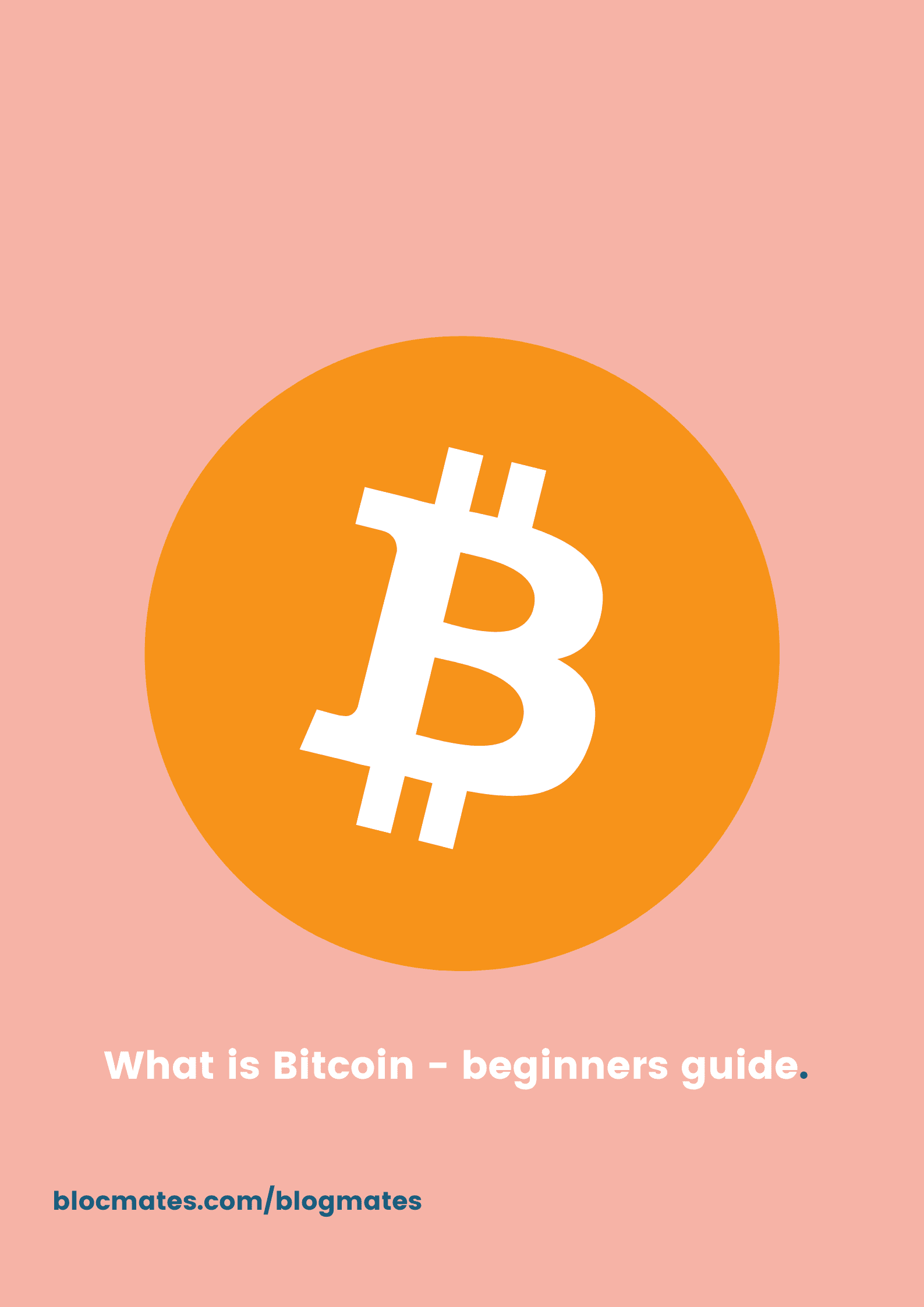 Bitcoin or BTC is a permissionless and decentralised peer-to-peer digital currency that allows trustless transactions without the need for an intermediary. Well, that sentence doesn’t help anybody, and here at blocmates, we try to remove the jargon and make it accessible to everyone.

Let’s break it down

Permissionless – Anyone can join in. It is computer code. It does not judge. Bitcoin is not just for the big guys. It is borderless and has been an invaluable tool for countries in which their local currency has been destroyed by hyperinflation.

Decentralised – This is a word you are going to see and hear a lot in the crypto space. It, as the name suggests, removes the need for a centralised authority i.e. a bank or a company. The Bitcoin blockchain is in fact, run by roughly 6,400 computers globally called nodes, which operate in a web-like structure. This ensures security and removes any chance of bad actors… ahem bankers… or anyone else for that matter, being able to tamper or withhold transactions.

Digital currency – Virtual cash, magic internet money. It exists in bits (hence Bitcoin) as opposed to cotton, metal or plastic cash… Does anything really have value? Would you pay £20 for a novelty Scooby-Doo £20 note? Obviously not, but they are fundamentally the same. Value comes from what people collectively agree upon over time. Bitcoin price keeps rising because more people come into this space, learn about it and deem it extremely valuable. Economics 101 tells us that when the demand for something goes up and there is a finite supply (there will only ever be 21 million BTC), the price is consequently driven up, as people are willing to pay more for it.

Trustless – The Big Short – Enough said. The Bitcoin creator Satoshi Nakamoto (more on Satoshi later) first created Bitcoin in 2009 in response to the global financial crisis triggered by greedy bankers. Read the Bitcoin Whitepaper HERE. The repercussions of this were catastrophic. Homes were lost, finances ruined and regular working people were left to pick up the pieces. Within the Genesis Block – the first Bitcoin ever mined (created), there was a secret message left by Satoshi which read:

“The Times 03/Jan/2009 Chancellor on brink of second bailout for banks.”

Bitcoin removes any bias, vested interests and any requirement for trust. The computer code takes care of that…

How does Bitcoin work?

So now we have an understanding of the definition of Bitcoin, how is it used? The 100’s of computers (nodes) running Bitcoin’s code all over the planet. If I am to send you 1 Bitcoin (you’d be so lucky), which is easily done with an app or through a website, I copy and paste in your public key which is a series of letters and numbers which looks like 13nHaDS4Uqq7jc9cieyYwr9F3y2qcqBmBo (yes, that is our BTC address) or more commonly this public key will have a QR code which the other person can scan, easy.

This and every other transaction is stored on an incorruptible ledger which is publicly accessible and completely transparent. Every transaction is tracked, stored and approved or rejected on the blockchain. Remember the nodes? The series of computers scattered randomly around the globe? Well anyone can start a node, remember it’s for everyone, no monopolies here. These decentralised nodes and their computing power are used to constantly check the legitimacy of each transaction and for their hard work, they are rewarded in Bitcoin. These transactions are stored as blocks and are all chained together in an irrefutable ledger hence, the blockchain.

But before you run off and buy some Bitcoin mining hardware. There is a decreasing reward every time 210,000 ‘blocks’ is reached. This is known as the halvening. 1 block is estimated to be around 1MB in size or around 500 transactions. In 2009, you would have received 50 BTC for verifying 1 block or 500 transactions. Now… it’s 6.25 BTC/block but the price is a lot higher… even if you but all your equipment get set up and begin to verify transactions, that doesn’t necessarily mean you will get your rewards. The fastest and most efficient node to solve the puzzle of the transaction (hash) gets the reward.

This means that more people who use Bitcoin, more transactions and consequently more blocks created and a quicker halvening. This may be good for the price of BTC.

Does Bitcoin cost anything?

This transaction fee is minimal and the transaction is quick! Try sending large amounts of fiat currencies £, $, euro etc. and watch the fees and the time is taken for each transaction increase. God help you if it is overseas and the exchange rate is unfavourable.

So, can it be hacked?

Bitcoin never has and never will be hacked, in my opinion. As you know by now, bitcoin is decentralised over around 10,000 nodes randomly scattered around the globe by anyone who wants to run a bitcoin node. For a hacker to manipulate the blockchain (remember this is the transaction record bitcoin is stored upon) they would effectively have to get all the nodes in the bitcoin network to agree with what they were doing, simultaneously. If they wanted to add for example an additional 1000 BTC to one of their hacking addresses or wallets, then good luck trying to get that approved by extremely powerful computers all competing to verify correct and truthful transactions.

Although in theory, if you could control 51% of all the bitcoin network by having some form of a supercomputer that had greater processing power than the majority of nodes on the network then yes you might have a chance.

Let’s not get into the quantum computer debate.

If you see ‘Bitcoin’ and ‘hack’ in the same sentence that is usually referring to an exchange being hacked or people giving out their private keys to scammers online. Never give your private keys to anyone. Best practice – when signing up to an exchange or a new wallet, write the private key phrase down on paper and store it in a safe place. We offer our 1st Timer service which you can book for free! We will take you through all this and more.

Can Bitcoin be taken down by governments?

If you have been following closely, you will understand that this is not possible. Bitcoin is not owned by anyone it is owned by everyone. It is borderless and operates in a decentralised way. What if they arrest the CEO? Satoshi Nakamoto? Well… who is he?

I believe Bitcoin is one of the greatest inventions of the 21st century and the protocol is borderline artistic. The main reason for this thought is that the whereabouts of Satoshi is unknown still to this day. Complete anonymity…

Creating the most disruptive piece of technology and not claiming it as your own (Craig Wright will argue otherwise) is possibly what accounts for a huge part of Bitcoins value.

Who, what and how are they going to shut down? I think governments are starting to realise this now.

This coupled with a new wave of huge institutional investors coming in to buy Bitcoin gives me a lot of confidence it isn’t going anywhere any time soon.

If you liked this article and want to learn more, we offer one-to-one support online to help you set up and get involved in the cryptocurrency space. Hit the ‘Book Today’ button at the top of this page to get started.

Equally, we offer guaranteed slots and exclusive content to our Patrons which you can sign up to below.

This will include our own portfolio updates as and when they happen. These will not be available anywhere else but through our Patreon link.

If you want to buy Bitcoin you can do so by signing up to AAX by following this link or scanning the QR code below.