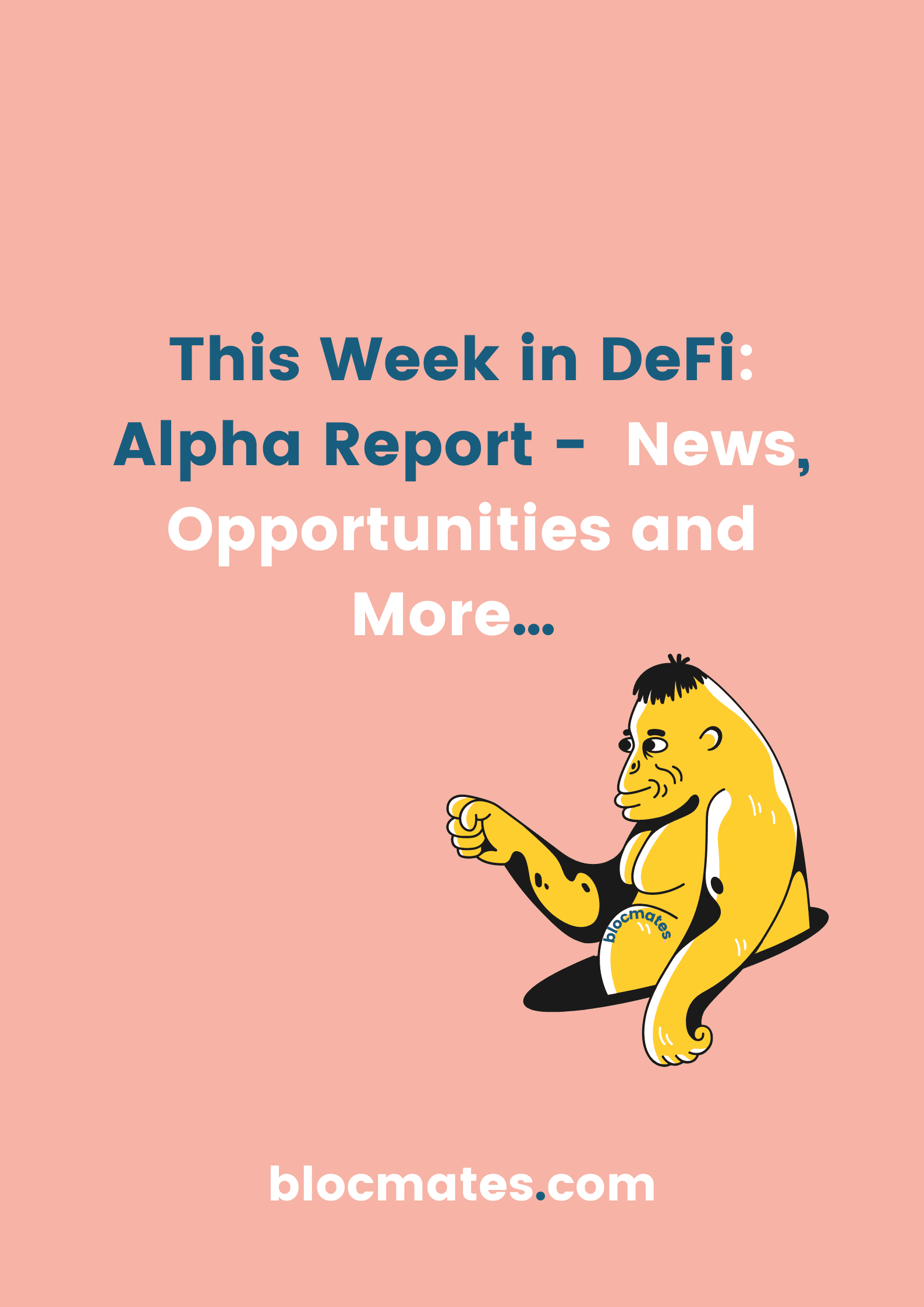 This Week in DeFi: The blocmates Alpha Report – News, Opportunities and more…

Welcome to the third instalment of This Week in DeFi. We are going to release a weekly round-up newsletter on our website which covers all the current events, opportunities and what to look out for in the coming days.

Here at blocmates, we are trying to help as many people discover and understand the weird and wonderful world of DeFi. If there is anything you are unsure about you can always join our free community ran Telegram which is aimed at helping newcomers and those who have issues in crypto and DeFi.

Before we start non of this is sponsored and if it does become sponsored in the near future we will tell you. There are enough shitty things going on in the industry at the minute. This is no strings attached.

On top of that, we aim to be at the forefront of DeFi, experimenting and trying new things as and when they come up. We do the troubleshooting so you don’t have to.

Anyway, enough of that it is time for the alpha report.

Last week we covered AXS, SAND and ALICE which have all performed very well during this turbulent market.

Win out of these world prizes, paid out in crypto, whilst earning interest on your original deposit.

This week there was a governance vote over at Adamant Finance as it came to the team’s attention that around $173m was deposited across multiple blue-chip vaults raising their TVL to over half a billion dollars.

The problem? Well, when you own half the TVL of a project which pays rewards in the native $ADDY token, there is cause for concern. The concern increases when the wallet began to take the 50% penalty for early withdrawal and then dump $ADDY onto the market causing a dent in the ADDY price.

It could be argued that if you have that much capital then swaying a vote either way is pretty easy… Just look at Uniswap.

Following the vote, the wallet has reduced its exposure in the Adamant Vaults to around $36m…

The team have brought out some great changes following this situation and are now boosting rewards for longer-term staker’s and have also released a 4-year lock-up vault. The rewards would be incredible on this…

The ICE token is paid out to those staking an IS3USD stable coin of USDC, USDT and DAI.

Incredibly, even after the last Iron finance fiasco, the vault surpassed over $1bn TVL!

At the moment from our perspective as the new stable coin is not actually released the move would be to be in the IS3USD pool whilst potentially off-loading half of the ICE rewards which sit at nearly 100,000 ICE per day.

Alternatively, you could immediately stake the ICE token in the single-sided staking pool for a designated period of time (probably best to unlock before the stable coin release in our opinion).

Who knows, we are not personally playing this one until the full protocol is up and running. Although that being said, we are surprised at the number of people who are still trusting Iron Finance with their funds, it is quite remarkable… Apes gonna ape.

This was a very weird one indeed. A statement was released from the Wault Finance team mentioning that they had been the victims of a FUD attack from two of its previous marketing team.

This was quite a surprise and on the release of the statement, it wasn’t a very good look for the two who also went on to try to blackmail the wault team for nearly $500k…

similarities between them
– Structure of projects and additional metadata.

You have been given time, don’t waste it.”

Although alt accounts were used, it’s easy for anyone to connect the dots.

Anyway, enough of all the bitching…

The team responded with a brilliant new product in WUSD. A commerce-backed stablecoin.

This caused the WEX and WEXpoly tokens to pump around 65 and 25% respectively… Some much-needed relief for the Wault Finance investors.

Looking at the WUSD protocol and reduced daily emissions on both tokens added to the now-increased utility of both tokens, I believe the WEX and WEXpoly holders may have something to smile about going forward.

It is a long road to recovery but at least there is now a route out.

For more on Wault Finance and their excellent DeFi eco-system head to their DApp HERE.

If your project would be a good fit for this newsletter give us a shout over at [email protected] to discuss further or contact us on Telegram using @blocmates as the handle.

Click this link to get started – If you need a hand setting it up we have already made a walkthrough guide on how to do this.

We have a Patreon page which is the price of a pint per month. It lets you know what we are buying and selling and when. It also has full access to my portfolio. You won’t get this access anywhere else.

We also have a live Early Retirement Index on there. A list of coins we believe will perform excellently over the next few years.

We hope this helps and has been useful. If you have any questions just get in touch and we will be more than happy to help. Please remember to sign up using the referral links to help support our platform.