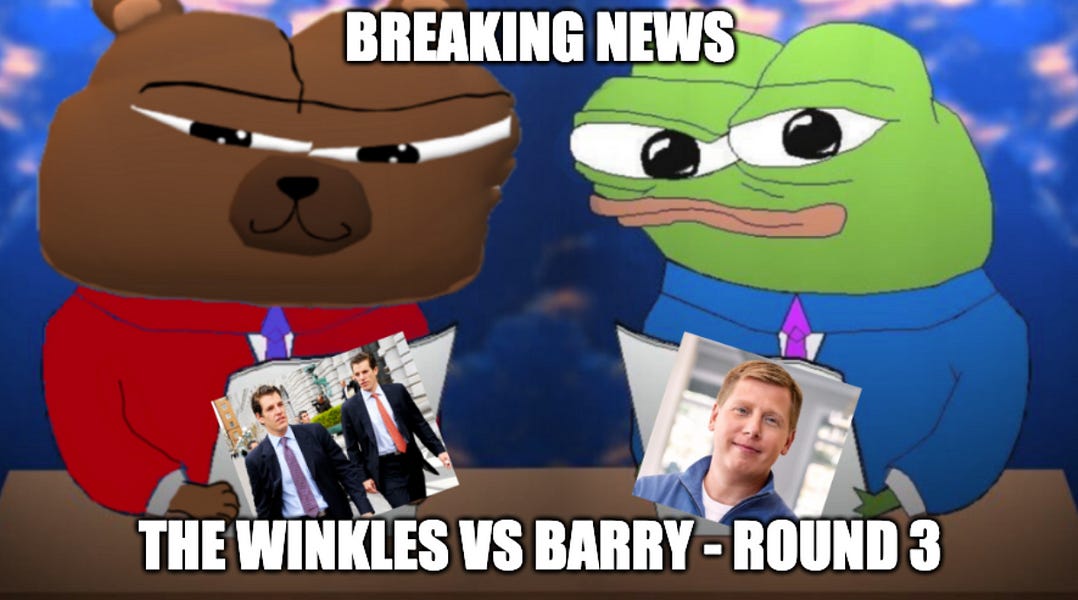 Today is a big day and depending on when you read this the market will have reacted to the latest CPI numbers from the FED. Soft landing? Bear trap? or the start of a Q1 bull run into earnings season?!

But before all that, let’s take a look into The Winkles vs Barry and if this is going to be what capitulates the market… again?

The TLDR of what’s inside

🔥 The Big Topic: The Winkles vs Barry = Capitulation?

🗞 Hot Crypto News: Avalanche partner with Amazon Web Services, FTX (magically) find $5bn of liquid assets, is DOGE no longer the Twitter Coin? and Gensler tells US army NOT to FOMO in and MORE

The Winkles vs Barry = Capitulation?

Right, this is getting way out of hand now.

If you’re in discord with us you’ll know I’ve been saying that this might be the next (hopefully final) leg of the capitulation cycle. The cycle that started with the Luna/UST collapse taking out 3AC, which then led to SBF pimping around the Bahamas in his Corolla, co-mingling funds with Alameda.

DCG is in a bit of a pickle and the Winkles want blood… Barry’s blood.

This, IMO, could be that annoying capitulation event that ruins our up only momentum for a short period of time and here’s why…

How did we get here?

Greedy plebs playing around with magical internet beans that were transacted in a flywheel of colours, ribbons and fairy dust.

Digital Currency Group (DCG) is an investment group that owns crypto lender Genesis. They lent a lot of money to a lot of the wrong people and got very, very rekt… including crypto exchange Gemini through the Genesis Earn Program.

Barry Silbert, CEO of DCG, first got rekt when 3AC (3 Arrows Capital) collapsed, wiping out over $1.2bn of their $2.6bn loan in the blink of an eye as Luna collapsed. Which DCG reportedly absorbed and claimed “business as usual.” This was clearly not the case as DCG entered into a 10-year “I promise to pay you by 2032” promissory note with Genesis, obviously doing nothing for the current liquidity issue.

And then SBF and his goon squad happened…

Obviously, these large sums of money disappearing into thin air have exposed 2022’s best zero-sum trade as it begins to fully unravel itself in a whole world of pain that even the accountants are having a hard time hiding.

The Winkles love a good letter and call out Tweet. It’s mad to think that Twitter has become the official arena for billion-dollar businesses to duke it out! Anyway, this is what Cameron wrote to Barry:

TLDR: you stole a husband and wife’s life savings, a family’s college education fund and a father’s bar mitzvah money for his son. Can we please have our $900m back?

As of Tuesday, Jan 10th, the Winkles went after Barry’s head in this letter addressed to the Board of DCG, which included a royal F-Bomb accusing him of “fraud” and not being “fit for service.”

TLDR: you publicly lied, you privately lied AND you committed accounting fraud so it’s time to go, serrr!

EXCLUSIVE LIVE ACTION FOOTAGE: Cameron Winkle and Barry were spotted squaring off in the street.

Is Capitulation around the corner?

Ok so hear me out here. I could be wrong and I hope I am for the sake of all of our bags but…

So, Genesis lent money to 3AC. They then created GBTC shares to use as collateral to borrow more in order to gain a premium on the net asset value (NAV) as GBTC was trading at a premium. Once the premium was claimable after 6 months, 3AC was able to cash it in, thereby killing off the NAV and degrading the GBTC collateral position.

Kamikaze at its finest.

Sprinkle a whole lot of FTX fraud, scandal and collapse and it’s no wonder DCG and Genesis are in such a sticky situation.

Tommy Shaughnessy from Delphi Digital breaks down the numbers along with plausible next steps to nuke town.

If it gets ugly then it gets real ugly real quick if DCG can’t raise the money needed to pay off creditors and they may need to nuke their GBTC/ETHE holdings.

I’d like to think that this is priced in due to it being a public story. But regardless, nuking a $600+m bag of anything will make number go down faster than last week’s NewYearNewYouInu rug pull.

What’s next for Genesis?

The Winkles have cancelled the Master Loan Agreement (MLA) with Genesis which may result in Genesis filing their Chapter 11, while their loan defaults lead to forced liquidation of assets.

AKA the NUKEing of that phat bag of Bitcoin and Ethereum.

Based on the MLA on Gemini’s website, Genesis failing to return Earn assets by the end of today would constitute an event of default

Ohhh and we will probably see another tweet threadoooor from the Winkles.

Ok so during the final edit, this slipped into the DMs:

** @bitvavocom releases a statement that they’ve rejected a 70% return of funds from DCG/Genesis. Developing.

At this point, it would start to make sense if Barry spoke to Larry at BlackRock to see if he wants to buy out the Grayscale trust at a fire price to merge into his Bitcoin bags.

Keep in mind this story evolves daily and the outcome of capitulation is purely speculative, but the case is valid and it’s one I’m mentally preparing for.

and Remember frens… you’re not going to make it back in one trade and telling pork pies leads to bad karma!

Oh, and I could have summed this whole thread up in this one Tweet:

FTX mysteriously finds $5bn in liquid assets (another down the side of the sofa find?!) adding to the $1bn found in December. How short they still are is unclear but $6bn + $425m held in the Bahamas might start to put a smile on creditors’ faces.

Ethereum Account Abstraction Upgrade could make it harder to lose your crypto as “accounts could be programmed to include social recovery systems.”

Binance’s bid for Voyager is a step closer as judge Michael Wiles “approved disclosure statements” with “another confirmation hearing in March.” Voyager creditors will also need to green-light the deal favourably. VGX pumps 40%.

#AWS makes it easier to launch and manage #Avalanche nodes, giving the network more strength and flexibility for developers.

Gensler targets the US Army calling crypto “the Wild West” and is heavily urging troops not to “get caught up in the FOMO.”

Is DOGE down and out? As pictures of new “Twitter Coins” and “Creator Rewards”, the platform’s digital currency get leaked. Whilst Dogeofficialceo Tweets “Don’t get disheartened if the “Twitter Coin” rumor comes to fruition and it’s not #dogecoin.”

CoinBase dumps another 950+ employees in an effort to reduce costs and battle the tightening crypto winter. But Cathie Wood did just buy another $1.45m in COIN shares.

Despite the pullback, the token is still up over 130% for the month.
bit.ly/3X2Kmp3

👀 Updates Across the Block

DOPEX, launch stETH SSOV in partnership with Lido Finance generating over $2.4m in TVL in 24 hours.

FRAX, governance proposals for $frxETH and $sfrxETH going multichain have been submitted including Arbitrum and Optimism.

SPICEFINANCE, partner with Abacus and to celebrate are giving away 5 Prologue NFT WL spots.

PENDLEFI, will support the Aura rETH-WETH pool (Rocketpool) and this thread goes into detail on “The Pendle ETH Maxi Arc.”

VECTORFI, proposal passed to list VTX on TraderJoe. Participation in the governance vote qualifies for a limited edition POAP.

and finally, CPI numbers are announced today. Do you see the FED dropping to 25 BPS or keep 50BPS leading into February’s meeting? Send your thoughts in Discord General Chat

Chadmandan @byChadManDan
Yeahhh I don’t see this happening as what JP is doing is working and too many “market experts” are calling for a soft landing.

🛡 Chart of the day

$SOL, running out of steam?

Oh Solana, you have BONK’d your way to almost $20 and reinspired an ecosystem of builders and degens.

But is the journey over?

After any good run, there is always a pull back and the Daily RSI is beginning to lose some steam BUT can this be a sustained move to the upside with the likes of BONK and other major projects, like HXRO, continuing to build the Solana Defi Ecosystem?

Bull Case, short term pullback that sees us break up past the $18.31 mark into uncharted territory to reclaim the HUGE imbalance sitting as high as $37.50+

Bear Case, it was all a dream and SBF and his goon squad dump any remaining bags sending Solana back down into the lower $10 – $12 range.

A look at what’s to come for the rest of the week leading into more BIG market-moving news coming out of the US.

And on that note, thanks for reading, have a fantastic day, and see you all in the next episode!

Discover how your skills could power the next generation of web3 and blockchain technology. Your next career move could be one you never imagined. Start your search today at Web3nomads.jobs.

This site uses Akismet to reduce spam. Learn how your comment data is processed.