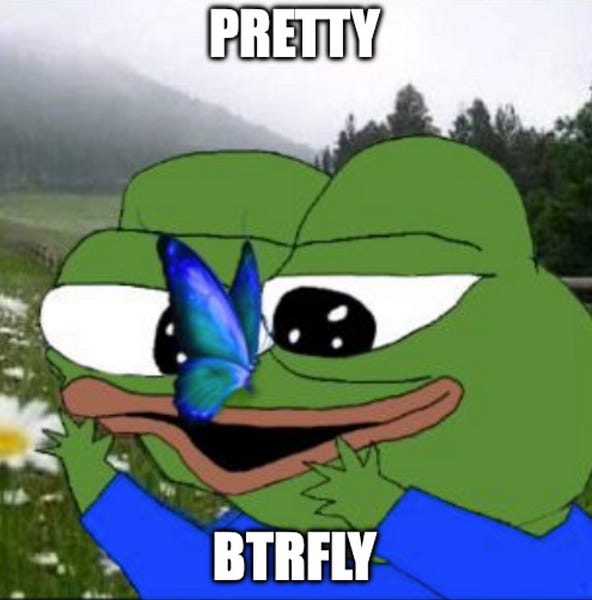 GMGM welcome back to the wonderful world of crypto!

Hope you enjoyed touching grass over the holidays as we certainly did. Back in action now with a new layout to the newsletter to bring you more in-depth TLDR straight-to-the-point info-tainment.

In a parallel dimension, Ethereums LSD and Solanas BONK have just sparked off the crypto bull run…hopium says its happening as Jimmy C keeps indicating up only with his bearish hate on crypto LFGGG.

The TLDR of what’s inside

🔥 The Big Topic: What is LSD and why is it the new narrative?

🛡 Chart of the day: Are we in for a bear market rally featuring the $SPX?

What is LSD and why is it the new narrative?

LSD is a wonderful thing.

No really, there have been many studies floating around Twitter (and NetFlix IYKYK) the last few days as to the benefits of LSD and the impact that Shanghai could play on it.

For those new around here LSD is short for Liquid Staking Derivatives. Simply put LSD allows investors to generate more benefit from their staked assets, now liquid, which can be used as collateral in popular DeFi protocols to earn extra magical internet beans.

Check out the Defi Llama LSD TVL rankings…as it looks like something something special might be happening as Ankr, Frax Ether and cbETH showing some of the biggest 1 month gains.

But before we get lost along the rainbow road in a world of colour and weird shapes let’s look at what’s actually spurring this new narrative, and for that, I’m going to take you to Shanghai.

Ethereum made history on September 6th ‘22 as the network went through its biggest, most successful upgrade leaving its mark in crypto history books. Eth 2.0 was the transition from proof of work to proof of stake, allowing investors and validators to stake their Ethereum to help support and secure the network to earn juicy rewards.

What the merge didn’t do was grant permission for staked Ethereum to be withdrawn from the Beacon chain, yeah I feel the pain of all those who ape ‘n’ staked close to $4,000…we salute you!

Word on the street is that the tentative date set for Shanghai to go live is March ‘23 with a primary focus on withdrawals before implementing The Surge-related Ethereum Improvement Proposal (EIP)-4884 (proto-danksharding which basically improves L2 roll-up scalability).

2023 might just be remembered (or at least in Q1 anyway) for The Great LSD War, as liquidity hunters look to support their (potentially drowned) staked bags of Ethereum to be used as collateral to, hopefully, bring their portfolio back to life.

Chances are that stakers will gravitate to the dex that has the deepest liquidity such as Curve or Balancer… Curve War season 2 anyone? Luckily, Avi isn’t around to fumble into any exploits.

Punkgod 🦇 🔊 @0xpunkgod
@0xShual @CurveFinance @Balancer @ConvexFinance @AuraFinance The LSD narrative will only get stronger after the the Shanghai update imho and when it gets to that point both curve and balancer are the only Dexes with deep liquidity to support the narrative, and if the LSD wars starts ( already started) protocols will need to incentivize LP.
2:57 PM ∙ Jan 3, 2023

There are 3 potential scenarios that we are seeing as to what could happen post-Shanghai upgrade.

Point 3 is where we could start to see the battle of liquidity happen for the bigger dexes as they will want to continue to provide deep liquidity in order to generate returns for investors. Worth mentioning here that Aura and Convex may play a large role in LP’s and incentives.

Fun fact, according to Hildobby’s Dune Dashboard, only 20% of all staked Ethereum is in the green…

Offft, let that sink in.

You can make your own judgment on the potential sell pressure, from what looks like real OG early Ethereum Whales and panic-selling $4,000 bag holders, will come from the Shanghai upgrade.

Too Late? Still Early? How can I position myself?

And as if by magic, CoinGecko has created a new section just for liquid staking governance tokens with LDO and SWISE being this week’s BIG winners. If you caught them early then Happy New Year to you!

If you are looking for exposure to the LSD narrative then tokens like LDO, RPL, and SWISE should be on your watch list because right now numbers go brrrrrrr.

As they have gone brrrr lets look at some other potential narrative plays.

Consider FXS, which according to everybody’s favourite crypto Pickle might just be a smart choice to take a look at stating that…

Pickle @Pickle_cRypto
frxETH will always have a better APR than Lido, due to Frax owning the largest chunk of CVX out there to direct rewards to their pools on convex.
frxETH can also be used in Frax own lending market to mint FRAX which has maintained a 1:1 dollar peg better than ANY stablecoin ever.
9:26 AM ∙ Jan 2, 2023

…whilst (s)frxETH is more tax efficient, has a better APR and functionality for all you DeFi degens out there that are looking to benefit from your now liquid frxETH.

As the title said I took a tab of LSD and saw a BTRFLY.

Redated Cartels BTRFLY tokens could be a potentially interesting narrative play, especially with the up-and-coming DINERO stable coin which is backed by staked Ethereum (we will know more about this when the white paper drops later this month).

Zoomer Oracle @ZoomerOracle
20/ A stablecoin backed by staked Ethereum would be a very innovative way. Lusd (liquity, protocol) is using Ethereum as pegged asset but the problem is the liquidity (incentive to mint lusd). Not as scalable as we want.
11:30 AM ∙ Jan 4, 2023

Until then I won’t speculate too much on what might happen with the Dinero stable coin but we do know that Redacted Cartel are proper giga brains and that the DINERO stablecoin will be used as a gas token.

I mean just look at that chart, somebody knows something about something because as soon as the new year flipped…BTRFLY spread its wings and began up only.

As far as narratives go, this makes sense and is one to watch out for both on the way up and on the way down. Pick your side, play it smart and take profits because 2023 is going to be a rocky year.

As for Ethereum, like always it’s probably a buy the rumour sell before the news.

Ok let’s get the SBF part out of the way as he pleads NOT GUILTY, cashes out $1.5m, anon bail co-signers remain anon (Gensler/O’Leary…that you??), talks to the White House about “pandemic prevention” and Martin Shkreli tells SBF to “listen to rap, shave his head and get street smart”…in other words, play GTA V. Retirement looks great for Sam!

Even whales get phish’d as DeFi GMX holder loses over $3.4m in GMX tokens in an apparent phishing attack. Have we not learned anything yet?!

Defi Llama races towards the top with the launch of its Dex Aggregator surpassing both Metamask and Coindesk in Volume in 24 hours.

BONK bounces Solana as the liquidity providers cash in on the airdropped dog-based meme token as it brings life back to the tarnished layer 1. Claiming they’re on a “mission to remove toxic Alameda-styled token economics.”

Genesis needs more time after the Winklevoss twins unleash a public call out on Barry Silbert to repay over $900m to the real people of Gemini.

Adam Cochran (adamscochran.eth) @adamscochran
SEC basically objecting on the grounds that Binance US couldn’t have this size of assets without some untoward dealing (likely with parentco)

Which would mean a commingling of the US entity. So if Binance fights it they risk US exposure…

👀 Updates Across the Block

BTRFLY, white paper dropping soon for it staked Ethereum-backed stable coin DINERO and how it will be used as a gas token.

CAMELOT DEX, the Arbitrum dex wars heat up as Tarot Finance joins the round table.

JOE, everything you need to know about the JOE’s move to Arbitrum.

SHIBARIUM, is it closer than we think?!

and finally, get roasted by Nick Huber

Give me your 280 character pitch.

I’ll roast your business and give you the harsh advice those around you are afraid to give you.

🛡 Chart of the day

Is a bear market rally coming for the $SPX?

There’s no sugar-coating it, January 2022 sucked! It was the beginning of the end for the SPX as we saw a 12.37% decline testing the 50EMA before a continued downtrend that didn’t stop.

12 months on we might flip-reverse it and see some upwards movement after a year of heavy selling. It’s an 8% move back towards 4100 with major market-moving news coming next week (which I might add could swing either way).

Bull case, J Powell gives a neutral to dovish tone to his speech with the CPI numbers moving in the right direction giving investors confidence targeting the 4100 zone

Bear case, J Powell continues a heavy-handed hawkish stance on the outlook for 2023 to show he means business and isn’t letting up targeting the 3500 and ultimately 3200 zone for a retest.

Come on JP serrrr, just 1 month of green…its almost valentines day after all!

And on that note, thanks for reading, have a fantastic weekend and see you all on Monday!

Discover how your skills could power the next generation of web3 and blockchain technology. Your next career move could be one you never imagined. Start your search today at Web3nomads.jobs.